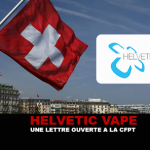 The Swiss association « Helvetic Vape Wanted to react to the update of the position of the advisory committee on vaping products dated 22 last September by sending an open letter to Mrs Meier-Schatz, President of the Federal Commission for the Prevention of Smoking (CFPT).

Our association has taken note with interest of the update of the position of your advisory committee on vaping products dated 22 last September. The principle of harm and risk reduction is an essential pillar of anti-addiction policies. However, you ignore it in your position taking into account only three principles: the reality principle, the principle of prevention and the precautionary principle. However, nicotine users (~ 25% of the Swiss population) pay a heavy price for the fact that the most popular and available method of nicotine consumption is fuel tobacco. While there are consumption modes that are largely less risky but whose marketing in Switzerland is still prohibited unfounded by the federal administration.

Forgetting, whether voluntary or not, the principle of harm reduction and harm reduction, which has been proven in many areas, shows the propensity of your commission to fetishize an objective of unrealistic abstinence, regardless of nicotine users. . It should be recalled here, nicotine itself has a low profile of risks to the health of the user. The problem is the burning of tobacco. In addition to ignoring this essential principle, the comments provided on the only three principles that appear to be of interest to the CFPT are unconvincing.

First take the reality principle, nicotine consumption is a widespread reality and most users of nicotine declare to consume it for pleasure. To imagine putting an end to nicotine consumption is as illusory and vain as wanting to put an end to the consumption of other substances. The reality principle therefore imposes the promotion of the least risky recreational nicotine consumption patterns capable of competing with combustible tobacco products on the market. Because if it is an unavoidable reality, it is the market. Only the loss of market share can encourage the tobacco industry to change and thus prepare for a future without combustible tobacco products. The reality is that regardless of the precise medium- or long-term risk associated with the use of vaping products, it is in any case much lower than the well-known risk of smoking smoked tobacco.

Secondly, the principle of prevention is not limited to telling people not to start and stop smoking to protect young people and non-smokers. The prevention of noncommunicable diseases, a large part of which derives from the use of combustible tobacco products, will be achieved through education, respectful and without lies, of the population of nicotine users on safer consumption patterns. In addition, users must take an active part in this process in order to considerably increase its reach compared to the simple injunctions used until now in prevention. Clear and honest information from the population, including young people, about nicotine risk reduction and harm reduction is already, in itself, a prevention measure. The claim that vaping products provide easier access to smoking is completely gratuitous and unfounded. No study has been able to demonstrate this phenomenon to date. On the contrary, countries where vaping is readily available have seen their teenage smoking rates plummet in recent years. The vapotage thus seems rather to participate of the prevention being a gateway of exit and avoidance of smoked tobacco, also for the young people.

Finally, the precautionary principle, again, only non-smokers seem to be entitled to this principle according to your commission. Nicotine users must be protected, not against themselves, but against the absurd regulations of the federal administration. Some nicotine users are now non-smokers, these users have applied themselves to the precautionary principle by turning to recreational nicotine consumption patterns less risky than smoked tobacco for their health and that of those around them. They did not do it thanks to the administration but despite the administration. The precautionary principle would be to immediately ban the sale of riskier products to the less risky products. Switzerland does exactly the opposite. It is based on an article of the ordinance on foodstuffs and everyday objects (ODAlOUs) to which tobacco products and vaping products are subject. But only vapors containing nicotine, the least dangerous, are banned from sale, not tobacco products containing nicotine. The reasons for this choice remain unclear, but the effects are clear: the Swiss market for combustible tobacco products is protected.

Chapter two of your commission's statement on "the current state of research" has so many errors, misleading shortcuts, approximations and omissions that many pages should be added to this letter to correct everything. This work is not worthy of a federal advisory commission. The members of your committee are obviously very little informed and / or ideologically influenced. The association Helvetic Vape can do little against the ideological bias but willingly offers to properly inform the members of your commission on vaping, nicotine consumption and the reduction of risks and damage.

The recommendations of chapter three are like the rest of the text, no vision of the future, no innovative proposal, but simply the expression of unfounded fears. The only positive point is what appears to be an alignment of your commission on the opinion of the Commission of Social Security and Public Health of the Council of States (CSSS-E): the vaping products must be the subject of 'specific regulations; separated from a possible law on tobacco products?

With respect to vaping product standards, we did not wait for the recommendations of your commission. Helvetic Vape has been actively involved in the international standardization process (CEN and ISO) for these products for a year and a half already, in the technical committees and in the working groups as experts representing consumers. The Swiss Vape Trade Association (SVTA) also participates. But it is necessary to note the glaring absence of the organisms which claim more security on the vaping products.

Regarding the Passive Smoking Act and complementary cantonal regulations, sorry to contradict you, they do not apply to vaping products. How could tobacco smoke texts be applied to tobacco-free products that do not emit smoke? You obviously want to have those texts applied immediately to vaping, but that will not happen without a legislative amendment.

Your commission then reassures its unfounded argument about a vaping effect of vaping on smoking among young people to justify a total ban on advertising for vaping products. While the ban on advertising is easily justified for extremely toxic products such as combustible tobacco, it is irrational about risk and damage reduction tools. Admittedly, advertising can quickly fall into irresponsible ways, but advertising is also likely to convince a lot of nicotine users, including young people, to change the way they drink without costing the state. A framing of advertising for vaping products is more interesting for public health than a stupid ban.

The WHO report you are quoting is old (2009), seven years in a sector that is so rapidly evolving, it is a chasm. Thousands of scientific studies were conducted during this period and the vaping products on the market today have little to do with 2009 products. I rather advise you to read carefully the report of the Royal College of Physicians, Nicotine without smoke: Tobacco harm reduction, published in April 2016. Of course the 2015 report from Public Health England is also a very complete source of information but all you seem to have remembered is the controversy launched by an editorial published anonymously in the Lancet. The author, found, is now the subject of an administrative investigation for mobbing and defamation. It is interesting to note that the Royal College of Physicians confirmed Public Health England's assessment of the relative risk of vaping products compared to cigarettes. Every serious health professional should systematically recommend, alongside smoking cessation options, vaping to smokers. Drug cessation products, which have been on the market for more than 40 years, have shown little effectiveness.

Regarding the age limit for the purchase of vaping products, you need to think a little more than you do. Users of smoked tobacco under the age of 18, and unfortunately they are numerous, are also entitled to the reduction of risks and damages. They should have access to less dangerous products than cigarettes and good information on harm reduction to make an informed choice. Your recommendation is only for products containing nicotine, what about nicotine-free products? It should be remembered that available statistics, including in Switzerland, show that young people experiment with vaping mainly without nicotine. This nicotine-free experiment is likely to protect young people from getting into smoking. Cigarettes still contain nicotine and additives to maximize their addictive potential, so any experiment has a high risk of addiction. The vaping can be tested without nicotine and even with nicotine the risk of dependence is lower than with a cigarette.

Taxes on fuel tobacco, the most dangerous form of nicotine consumption, are sufficient to fund research on less risky consumption patterns. To recommend a tax on vaping products identical to that involving tobacco products is totally inconsistent. Fortunately, Parliament made a lot more sense in 2011 when it exempted these products from the tobacco tax. It is absolutely necessary to maintain a high price differential between the most toxic products and the reduced risk products to encourage a change of consumption pattern among nicotine users.

As a consumer association, we are obviously concerned with the quality of vaping liquids. Part of the solution lies in the development of quality standards, which we are already participating in. We are also in favor of additional controls by the state. But given the current pseudo-regulation that forces nicotine users to order their liquids abroad, to buy their liquid on the black market or to make their own liquids themselves, how to put in place effective controls for protect users?

Finally, your position has not been updated based on the latest research data. The Swiss population is entitled to clear and unbiased information from its institutions. But about vaping, neither your commission, the Federal Office of Public Health (FOPH) nor the Office of Food Safety and Veterinary Affairs (OSAV) provide objective information. It is very damaging. And, please, start to see further. There are options, including prevention et risk and harm reduction, respectfully including users and their ability to take control of their health, which can rapidly reduce the prevalence of smoking in Switzerland. The ridiculous procrastination that has led to the present ubiquitous situation must stop in favor of public health.

I hope that this letter will initiate a change in your committee and I present you, Madam, my best regards.

Olivier Théraulaz
President of the association